LOCATED IN THE HEART OF SILICON VALLEY

Vaulting at Garrod Farms Since 1960! 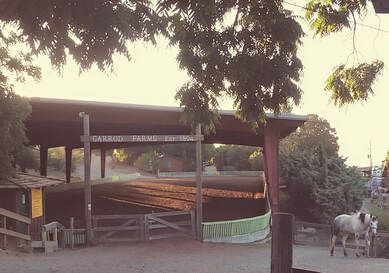 The main covered arena is just one of the many facilities Garrod Farms has to offer.
Currently, Garrod Farms has 120 acres of stables, pastures, vineyards, and family homes with access to 23 miles of riding trails on the Fremont Older Open Space Preserve. The ranch has remained in family ownership and operation since 1893, and celebrated its centennial in 1993.

Garrod Farms has been the home for vaulting since the 1960’s and has been incredibly supportive of the American Vaulting Association.  If you’re coming to check out our vaulting please plan to take a look at what else Garrod Farms has to offer. It truly is fun for the entire family.
LEARN MORE

The "Sky Arena" and Practice Area 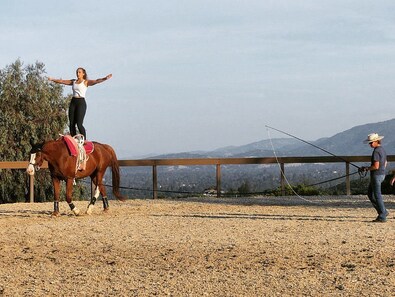 Views of the Silicon Valley from the Sky Arena.
In 2019, the Sky Arena was constructed to replace the two original circular vaulting arenas thanks to the generous donation of Garrod Farms. It features top of the line German Geo Textile (GGT) footing, built in drainage system, and lighting which allows for year round vaulting and prioritizes safety of both horse and vaulter. It is conveniently located adjacent to the vaulting barrel area for convenient practice access and has a gorgeous view of the Silicon Valley. The arena is proudly dedicated to Mount Eden Vaulting Club founder, Jane Garrod, who was a champion for the sport and its growth over the years.

The vaulting practice area has everything the vaulters need to have a successful practice. Along with stationary barrels, Mount Eden has a state of the art MOVIE barrel that provides the vaulters with a "moving" horse experience before transitioning their routines to the back of their equine teammate. The practice area is stocked with gymnastics mats, conditioning equipment, storage lockers, and lights for safe an successful training. 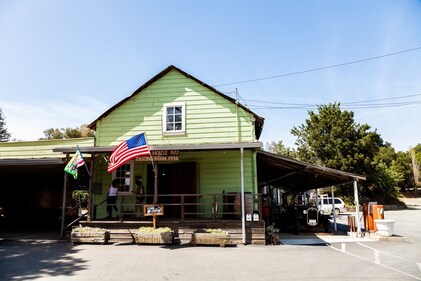 The Fruit House is the current tasting room location and event space for the winery. (Photo courtesy of CGV)
The Garrod family began its involvement with California agriculture and open space in 1893, purchasing 66 acres from the Mount Eden Orchard and Vineyard Company.  For decades they produced dried prunes and apricots, like much of the Santa Clara Valley, which was known then as “The Valley of Heart’s Delight.” In the late 1950s, the valley started to become less agricultural and more developed.

Alongside the horse operation,  there are 28 acres of vineyards here on the property, which are farmed both organically and sustainably. Current Winemaker, Bill Cooper, refined his craft and learned from his father George Cooper and fellow vintners in the Santa Cruz Mountains, Napa, Burgundy and Bordeaux. Bill’s wife Doris Cooper directs the winery's marketing efforts. Jan Garrod is our General Manager, overseeing the vineyard, winery, and ranch operations. Jan’s son Trevor Garrod serves as Cellarmaster and Ranch Yard Foreman; and Jan’s niece Cory Bosworth manages the Tasting Room, Wine Club, and Events.
FIND OUT MORE